In this week’s wrap up we’ve got three new beers from Mountain Goat, a limited-release Modus Operandi mango IPA, a small-batch Sauvin IPA from Wayward, and a newly-arrived amber ale from NZ brewer Mac’s.

According to Mountain Goat, the rather large 10% ABV and 100 IBU Triple IPA leads with a vigorous hop aroma, bursting with citrus, tropical fruit and pine thanks to a mix of Centennial, Columbus, Amarillo and Simcoe hops. 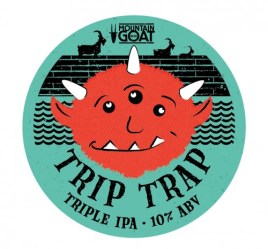 The first taste delivers a quick flash of alcohol and pleasantly intense bitterness drives the finish.

The Trip Trap Triple IPA is available on tap at the Mountain Goat brewery in Melbourne and a selection of craft beer venues nationwide.

Mountain Goat must be busy at the moment as they’re also releasing a sour ale this week, in a first for the brewery despite its nearly 20-year history.

The Barrel Breed Plum Sour Ale 2017 is hazy purple to the eye – with plum and oak aromas – and has a bold, upfront tartness that is followed by a lingering sweetness from the plums. 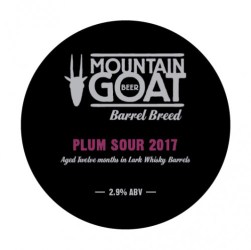 The brewery also say that the sour came about thanks to a coincidence, when a “delivery of Tasmanian Plums took a wrong turn and ended up on our doorstep,” a month after they had brewed their first kettle sour.

“Since our brewers can’t resist an opportunity to get a bit experimental, we transferred our kettle sour into some Lark whisky barrels and loaded in 45kg of plums… we then shipped the barrels off to a top-secret location where they remained for 12 months.”

The sole keg will be tapped at the Mountain Goat brewpub on Sunday March 19, while the 250 bottles that have been produced will also be available at a limited list of craft venues – so keep an eye out!

The team at Mountain Goat have also collaborated with Brisbane metal venue CrowBar to create a saison with a dark twist.

Brewed with Belle Saison and Abbey yeast strains to keep the beer light and impart notes of spice and orange peel, a combination of cold-steeped dark malts givethe beer a deep black colour – without compromising the traditional Saison flavours. 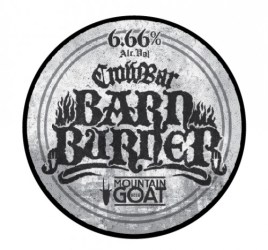 Mountain Goat say the Barn Burner belies its heavy image, delivering a thirst quenching dryness and rounding off with a delicate tinge of orange peel.

Clocking in at an appropriately devilish ABV of 6.66%, the Barn Burner Black Saison will be the ‘karma keg’ at CrowBar’s Brewsvegas event, Metal Meets Mountain Goat, this Friday March 17. After that, it will be available at the MG brewery and a selection of craft beer venues in Victoria, Queensland and NSW.

The Modus Operandi Veil of Pisces IPA (6.0%) was brewed with a proprietary hop blend and 30kg of fresh Queensland mango puree, and according to MO’s Facebook page, with the “magical conditions of being brewed under the veil of the most recent new moon and eclipse.” 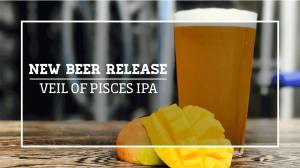 Distribution of the beer is very limited: the fruit IPA is available at the Woolly Mammoth Alehouse in Fortitude Valley, Modus HQ in Mona Vale (Sydney) and “discerning pubs and bars as they get snapped up.”

The “All Day Nelson” Nelson Sauvin Single Hop IPA is very lightly malted with biscuit and Pilsner malts to keep the focus on the hop character, with Nelson Sauvin used both in whirlpool and dry hopping. 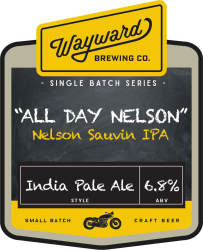 Head brewer Shaun Blissett said the Sauvin hop is “one of our favourite (but nearly impossible to obtain) hops from New Zealand” thanks to its unique, fruity aromas, and describes the beer as “an absolute explosion of gooseberry, stone fruit and delicate white grape on the palate.”

“We used up our full stock [of Sauvin] for this small-batch brew, so best to grab a taste of it because it’s one you won’t want to miss,” Blissett says.

Wayward also say the beer is quite delicate tasting considering a relatively high ABV of 6.8%.

Launched at the Wayward Brewery and Bar on Wednesday night, you’ll find it there and at the following locations in Sydney and Canberra:

Mac’s Sassy Red is a modern interpretation of a classic amber ale style, and uses only ingredients sourced from the land of the long white cloud.

Five different malts are combined with Motueka hops, resulting in a lively and intense brew, bursting with spicy flavours and aromas.

At 5.0% and 30 IBU, this is a drinkable ale driven by biscuit, caramel and stone fruit flavours – pair it with meaty and spicy dishes for a taste sensation.

Wolf of the Willows have announced they will be re-releasing their popular Wolf Blood Red IPA.

The brewery say the the Wolf Blood is a true West Coast Red IPA, with “hops, hops and more hops balanced by lovely caramel malts.”

“This beer is characterised by a punch of citrus, pine and stone fruit 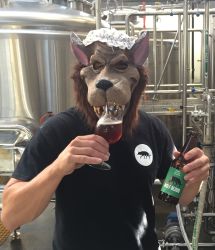 hops on the nose followed by aromas of toasted malts. The forward palate comes with a wave of resiny hop flavour followed by a strong malt backbone, balanced by a dry rear palate and signature IPA bitterness.”

The Wold Blood is a collaboration brew with Blood Hound Bar in Brisbane, where it will be launched at their Hopsfield event during Brewsvegas on March 18.

Following the release at Blood Hound Bar in Brisbane, Wolf Blood will be officially launched in Victoria at Beer DeLuxe in Federation Square on March 25 at their ‘Hop Quest’ event.

After that, Wolf Blood will mostly be available in the Brisbane and Melbourne markets – with limited quantities hitting NSW, SA and WA – and stockist updates to come in the following weeks.