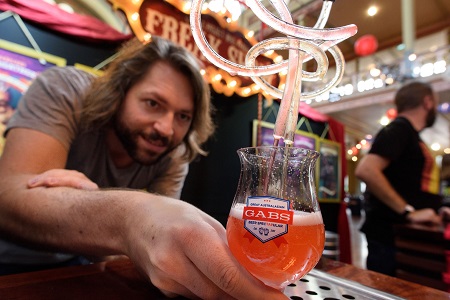 The Great Australian Beer Spectapular (GABS) will be bigger than ever this year with up to 180 Festival Beers and Ciders to be exclusively launched.

The GABS Festival Beers and Ciders experience allows leading brewers and cider makers from Australia, New Zealand and around the world to create a unique beer or cider specifically for the event.

Festival Beers and Ciders are served from distinctive 40ft shipping containers which are converted into bars, and this year GABS is growing this concept by introducing a third container bar at its Melbourne and Sydney events.

In 2017 GABS is taking the entertainment offering to new heights with stages built atop the shipping container bars. Dramatic live performances including costumed acrobatic artists atop sway poles circling nine metres above customers’ heads, precision Taiko drummers booming from container to container, and even an operatic duo reaching a soaring crescendo.

Then on the event floor, there will be a number of mini stages featuring solo circus performances interspersed between the container top acts.

Finally, roving performers will bring the show right to the punters table. These include the perennial house band ‘The Ale Capones’, a highly engaging four piece who really know how to work the GABS crowd.

In 2016 GABS attracted more than 32,000 people, up 22 per cent in Melbourne and Sydney, and with the addition of Auckland, the total visitor numbers were up 42 per cent year on year.

On sale 16 March in all cities