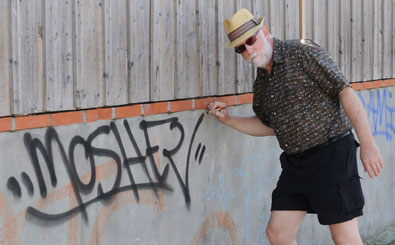 Brewers are getting more and more adventurous these days. Some start their first brews with a toasted peach, barrel-aged saison for Saccharomyces sake! When thinking about these ‘radical’ beers, one name springs to mind – Randy Mosher. Homebrewer technical editor, Jake Brandish, caught up with the great man for the first of a two-part series, published in Beer & Brewer.

If you haven’t heard of Mosher, do yourself a favour and head to your favourite source of reading material and invest in his work. Most serious beer geeks with a few books in their brewing library will more than likely have one of his publications as he has written such classics as Radical Brewing, The Brewer’s Companion and an absolute must for any serious home brewer, Tasting Beer.

Recently, I had the honour and pleasure of chatting with Mosher. I wanted to talk to him regarding the current wave of radical brewers like Moon Dog and Garage Project and get his take on where he sees brewing headed. We also discussed the US craft beer scene and where he draws his inspiration for certain brewing adjuncts.

It just goes to show how creative we can be as brewers. We will continue our chat with Mosher in the Winter Issue of Beer & Brewer.

An awful lot. Since then, I’ve written two more books, Mastering Homebrew and Beer For All Seasons, both of which came out early last year. I did include a lot of international ideas and recipes based on my travels, including that visit to Australia.

The other major change for me has been my involvement as a partner in two brewing ventures in Chicago. One is called 5 Rabbit Cerveceria, and is Latin in its thinking and presentation. The idea for the project started when my partner had a revelation about how vibrant and full of life everything else in Latin culture is, and how dull and lifeless the commercial beers are.

The other brewery is called Forbidden Root. We call ourselves ‘botanic brewers’ and we try to incorporate lots of non-standard ingredients. The project started as a mission to formulate a beer with root beer flavour characteristics, and that led to a ginger beer and a discussion of what the bigger idea was, and that ended up being the botanic thing. We really focus on the ideas and flavours and then try to build the rest of the beer around those rather than starting with a style and warping it – although we do that sometimes as well.

Q You’re most famous for your book Radical Brewing, what is your definition of ‘radical brewing’?

You could just as easily call it ‘creative brewing’. The idea is not to be radical for the shock value or just to push limits, but to make a deeply creative and meaningful artistic product that in some way tells a story. It also means brewing with an eye to tradition without being limited by it.

Q Where do you get inspiration to try something in a beer?

Q What advice would you give a brewer who wants to try a flavouring or adjunct and doesn’t know where to start?

Start with a big idea: a food, a culture, a historical era. If you’re starting with an ingredient, think about how it is used outside of the world of beer. Are there roasty or toasty elements common with it, spice or sweetness? Beer is easy to base on food recipes because there are so many food flavours in beer. Once you have an idea, stick to it and make all your decisions based on how well it serves the concept.

If you’re really focused on an ingredient, but have no idea what goes well with it, just make up a tincture – I usually do either 1:5 or 1:10 by weight of ingredient to vodka. Let it sit for a day or two, and strain through a coffee filter. Carry a little squeeze bottle around with you and add it to every beer and see where the magic happens. You’ll make all your friends crazy, but what the hell.

Q Have you brewed with any Aussie ingredients like wattle seed, lemon myrtle or river mint?

I’ve done some homebrews with wattle seed and really love its peanut buttery flavour in a brown beer, but we’ve not yet used it commercially. I’ve used pepperberries, but we also use lemon myrtle for our ginger beer, where it adds a super-clean lemon drop top-note that supports the key lime that is the secondary flavour in the beer after the ginger. Just a side note: some of these exotic ingredients are crazy expensive. Haven’t heard of river mint. Tell me more.

Q  What is your take on the Aussie brewing scene?

It’s been a few years since I’ve been to Australia, and I know the scene is evolving rapidly, as it is everywhere. Of course, we only see mass-produced beers like Foster’s over here, so I’m not really in a position to comment.

Wattleseed comes from various species of the acacia tree. When roasted, it develops an intense, nutty aroma a little like dark-roasted peanut butter. The base beer is a creamy brown ale that shows off the wattleseed nicely and enhances its nutty character. For a variation, add 500gm of macadamia honey to the fermenter once the primary is winding down. The Fullers (London 1968) yeast accentuates the malt.