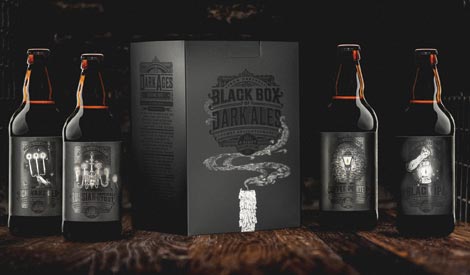 The Black Box is a drinkable guide through the murky history of these historically-inspired brews, which include a schwarzbier, coffee porter, black IPA and Russian imperial stout.

From desolate monasteries of Middle Ages Germany to the breweries of fog-bound 1800’s London, 4 Pines aims to take the drinker on a trip through the tales of stout and porter; the Great Porter Flood of 1814, the tax war that resulted in the strongest beer ever to set sail from Britain to Russia and the secessionist movement of the Pacific Northwest of the US.

This is the second time 4 Pines has released a collection of beers which look at the history behind certain styles, with its ‘The Bastard Children of the British Empire’ special pale ale six-pack launched last year.

“We were looking to follow that format again and bring an equally exciting release for our customers and challenge ourselves by brewing the different beers.

“A big part of what we love doing is explaining beer styles and their histories and taking customers on a journey. We wanted to shine the light, if you will, on these dark beers.”

Brewing the four beers was a great way for the 4 Pines brewing team to challenge themselves, with the schwarzbier proving the most difficult.

“We had some challenges brewing these beers. They were all difficult in their own way, but the biggest challenge with the schwarzbier was using dark malts and getting the pH right in the mash. It didn’t quite hit the mark the first time so we had to re-brew it,” explained Willcock.

After a successful launch of the dark beers at the 4 Pines Brewery in Brookvale last night, it’s likely we’ll see the brewer look to highlight another collection of beers in the future.

“Yeah absolutely we had a lot of fun doing it and our customers have responded well with the beer education and side-by-side comparison,” said Willcock.

“It’s something we’ll consider doing down the track, but it’ll be hard to top the two we’ve done.”

THE FOUR DARK BEERS AND THEIR HISTORIES

The Augustine monks of Kulmbach in Bavaria perfected the ‘black beer’ or ‘schwarzbier’ in the 16th century. However the beer, still brewed today, may have had an earlier start. A 3,000-year-old Celtic tomb discovered in the region contained the remains of a black beer so if any place in the world can lay claim to being ground zero in the birth of dark beer, it is here.

Porter was born in London circa 1720s but the rest of the story is murkier than a London fog. Was it named after a Dutch drink called ‘Poorter’ or thirsty market porters? Did porter really start its life as ‘Thrale’s Intire’ or was it a combination of three different ales called ‘Three Threads’? There is probably a pint or two of truth in all these stories. We do know that the golden years of the 18th century saw huge vats of the black stuff tower over London and Baltic porter, a more robust version, shipped across arctic seas.

4 Pines collaborated with Single Origin Roasters to produce its porter, which is “dark brown in colour, rich and robust in flavour and has a distinct roasted coffee aroma with fruity, chocolate notes.”

And in the red corner…Portland! Nestled amidst the largest hop producing regions in America, this area of the Pacific Northwest is also known as ‘The People’s Republic of Cascadia’. The residents have long desired to secede from the union over hop grievances and they’ll be damn well taking their beer with them, the Cascadian Dark Ale, originally brewed in Portland, Oregon in 2007. But to fan the flames of revolution further, there’s the little issue of who brewed it first – Portland or Vermont? Add the US Brewers Association decision to ban the name ‘Cascadian’, as it was felt to promote an air of ‘regional exclusivity’, and you have pistols at dawn. So Black IPA it is then.

The 4 Pines Black IPA is dark in colour and its, “dry hop-forward balance is complemented by stone fruit, tropical and citrusy characters.”

Imbibed from Battersea to the Baltic. In 18th century London, few suspected that a rather strong porter would rise to be the toast of Russian royalty. The reason for this success, as one story goes, is that a greater amount of alcohol and hops was used to fortify the brew for its journey through Arctic waters. Another is that our Russian friends simply liked a stronger drop. Whatever the reason, once Catherine II, Empress of All Russia, tasted this alcoholic alchemy she championed the black libation and Russian imperial stout was born. The drink, no longer called a porter due to its stronger, more ‘stout’ nature, was reputed to keep for seven years.

The Black Box will be available from the end of April, with the beers unable to be purchased separately. RRP $34.99 (4 x 500ml).