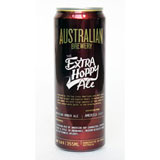 The Australian Brewery has unleashed its Extra Hoppy Ale in distinctive 355ml cans. Described as being inspired by the hop crazy Americans and the quest for ever bigger and hoppier beers, it’s a medium bodied American Amber Ale with a large (they’re not kidding – it’s large) amount of hops added at every conceivable point in the brewing process.

The result is a very drinkable beer that disguises its 5.8% ABV very well. Available from speciality beer shops around Australia.