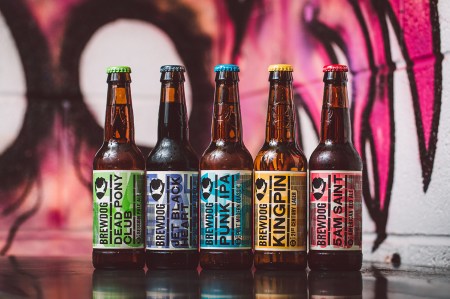 Rapidly growing BrewDog will open a brewery in Australia, according to co-founder James Watt.

The news comes as BrewDog announced that TSG Consumer Partners has acquired approximately 23 per cent of the company, in a £213 million ($352 million AUD) transaction that involves £100 million to fund BrewDog’s continued global expansion.

According to BrewDog, this means that shares purchased in Equity for Punks in February 2010 are now worth 2,765 per cent of their original value– quite the payday for shareholders.

Fans and supporters of the company who invested in Equity for Punks IV – which closed in April 2016 – have also seen the value of their shares increase by 177 per cent in just one year.

“We are growing mega fast at the moment,” said James Watt.

“We recently shared our ambitious five-year plan with our Equity Punk shareholders, which included adding more capacity in Ellon and Columbus as well as building new breweries in Asia and Australia.

“All of these projects are immediate opportunities and they all link completely back into our core mission of making other people as passionate about great craft beer as we are.

“This deal will enable us to take our business and our community’s investment in BrewDog, to the next level.”

TSG Consumer Partners is a San-Francisco based strategic equity investor in high-growth consumer brands, and was founded in 1987, with successful previous investments include vitamin water.

Despite the firm buying a large share in the company, Watt says that he and co-owner Martin Dickie “remain [as] controlling shareholders and fully committed to BrewDog, and this investment will allow us to accelerate our mission.

“We’re not going to let the deal go to our heads, but Martin did buy himself a new jumper.”

The news comes only a month after BrewDog announced their ambitious plan to open a beer hotel attached to a brewery in Columbus, Ohio, with beer taps in every room and even a ‘beer spa’.