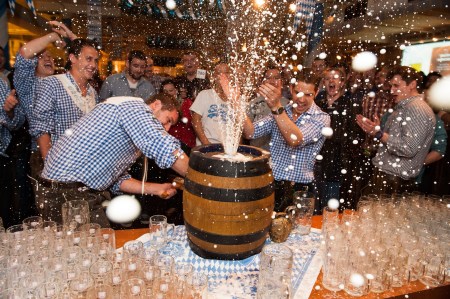 The biggest Oktoberfest party outside of Bavaria is set to take place over six weeks in three Australian cities.

Kicking off at midday on Saturday 16 September – at Munich Brauhaus The Rocks in Sydney, Munich Brauhaus South Wharf in Melbourne, and Bavarian Bier Café Eagle Street Pier in Brisbane – the first Oktoberfest bier kegs will be ceremonially tapped, signaling the start of the inaugural Oktoberfest street parades in each city.

The parades will see a colourful collection of costumed entertainers singing, dancing and bringing a slice of Bavaria to Australia, before taking the celebrations back to the three restaurants for an afternoon and evening of family-friendly fun and games.

Throughout the day another three kegs will be tapped, releasing the remaining official Oktoberfest biers and signaling the start of key festive events.

Events include the inaugural Dogs of Oktoberfest contest (pictured below) – with the best-dressed pooch taking home a trophy and an Oktoberfest bar voucher for their owner, as well as their very own ‘doggy bag’ – a pork knuckle eating championship, and traditional on-stage yodeling, alphorn and slap dance. 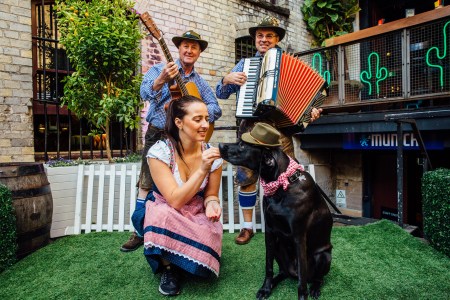 German passport holders will even be eligible for a free beer upgrade – from a 300ml to a 500ml beer – during the six-week long celebrations.

Throughout the festivities, attendees will also have the chance to become an official ‘Oktober-Boss’ by proving their dedication to all things Oktoberfest and completing a number of challenges, including drinking a schnapps, a stein of each of the four Oktoberfest biers, eating a schnitzel, a pork knuckle and a pretzel.

Those who achieve the ultimate Oktober-Boss status will receive prizes, including exclusive invitations to the Oktoberfest closing party.

For further information about the festivities, visit the official Oktoberfest website.