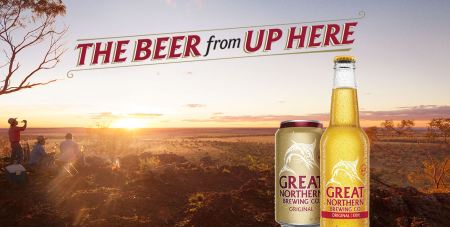 CUB’s Vice-President Marketing Australia, Richard Oppy, told Beer & Brewer that as a result of the huge popularity of Great Northern Super Crisp and an increase in consumer demand for Great Northern Original outside of Queensland, the decision was made to go national.

“When we launched Original in 2010, the plan was to play into the local provenance and so we brewed a refreshing, easy-drinking beer that was perfect for that hot climate in Queensland and it was inspired by the original Great Northern Brewery in Cairns,” Oppy said.

“Consumers have just loved the positioning of the beer, with the great outdoors and going boating, camping and fishing – it’s so aspirational. But what we’ve found is that’s not just for Queensland, that positioning is powerful for everyone in Australia.”

Following on from the launch of Great Northern Original, two years ago CUB launched the mid-strength Great Northern Super Crisp everywhere outside of Queensland, and that has seen the popularity of the brand grow massively.

Oppy added: “People love Great Northern Super Crisp, but there are those occasions when consumers are looking for a full-strength beer, particularly in on-premise, and so the demand for Great Northern Original has been phenomenal.”

Oppy said that CUB had noticed that Great Northen Original was starting to creep into markets outside of Queensland, and so given the need to stay in control of the brand plus the increasing demand, the decision was made to release the beer nationally.

“We talk about win, win, win and one of the key reasons Great Northern has been such a successful brand is that it has brought so much value to the beer category,” Oppy told Beer & Brewer.

“Consumers love this brand because they love what it stands for and they love the taste of it, our customers love it because it’s a better margin for them, and clearly the more we sell the happier we are. When you get a win, win, win like that with all three parties getting behind something it really helps to create success.

“But while there has been so much consumer demand and customer demand, we still didn’t want to go national until we felt like it was the right decision to make for the brand in the long-term, but it is time to let go of the shackles, in a positive way.”

The success of Great Northern was highlighted in the 2017 ALSA-IRI State of the Industry Report, which showed Super Crisp and Original were two of the top three brands accounting for all liquor dollar growth in 2016; Super Crisp and Pure Blonde accounted for 40 per cent share of all the liquor channel’s dollar growth last year. Despite only being available in Queensland, Original was the third biggest contributor to dollar growth in 2016 and CUB is confident that contribution will continue to rise as the beer becomes available in the rest of Australia.

The Great Northern Original will be available to all retailers from Monday and will be in six-pack and 24-stubbie cases as well as in 3x700ml longnecks. The beer will also be available in the on-premise, coming in 49.5l kegs.