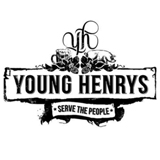 Young Henrys head brewer Richard Adamson has accepted an invitation to head to England and brew for the JD Wetherspoon’s International Real Ale Festival. It will be Richard’s third trip to the festival.

The festival features ten brewers, invited from around the world to travel to England and brew their beer with local breweries. This year will see Richard team up with the Banks Brewery in Wolverhampton to produce Young Henrys Real Ale “specifically for cask conditioning, that will go to more than 900 JD Wetherspoons pubs across the United Kingdom.

“I’m really looking forward to getting back in the Banks brewery with Simon Yates and making our Real Ale,” Richard said. “It’s an honour to represent Australia with a beer that’s inspired by those classic English bitters and showcase our unique locally grown hops. It’s fantastic that the beer will be cask conditioned and served on traditional hand pump across the United Kingdom.”

Richard isn’t the only antipodean brewer heading to the festival, however. New Zealand brewers The Yeastie Boys will also be heading across for the festival, and have been lined up to brew their Gunnamatta Earl Grey IPA at the Adnams Brewery in Southwold, Suffolk.

The JD Wetherspoons Real Ale Festival will run from 26 March to 10 April this year.