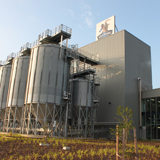 On 23rd January, at 9am Carlton & United Breweries (CUB) Management
broke the news with brewery staff, that the Central Coast located brewery, one
hour north of Sydney, was going to close down in 6 months time.

The
brewery is well known as the home of Bluetongue, launched by a team of
passionate beer lovers and businessman in 2001, with John Singleton buying a
stake in 2005, then in 2007 was acquired by Pacific Beverages and then in
December 2011 acquired by SAB Miller. The brewery today brews Bluetongue along
with being the site for brewing under license of Peroni, Miller Chill and
Miller Genuine Draft, all SAB Miller brands.

The
reasoning for the close has been given to Beer & Brewer by Jeremy
Griffith, CUB Corporate Affairs Director, as follows:

What will happen to the
brewery and staff? Mr Griffith explained the following:

Beer & Brewer is sad
to hear of the Bluetongue brand ending, after such an interesting short history
and great support of its local community. We hope all staff wishing to stay in the industry can find another job as soon as possible.