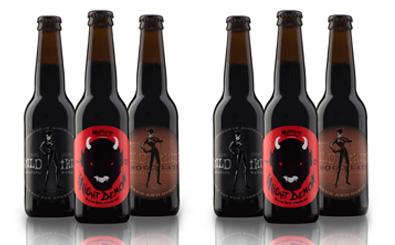 For the first time, there will be two Wild Thing Imperial Stouts in the bottle – the original milestone beer, plus Wild Thing Chocolate Imperial Stout, both brewed by the beer’s original recipe-meister and head brewer, Graeme Mahy.

“I love this beer! There is just nothing insipid about it – Wild Thing is just full of attitude,” said Mahy. “It’s well above the upper limits of flavour and colour for its class, Wild Thing is totally black and impossible to see through even when held up to the light.”

The brewing team decided to create a chocolate version of Wild Thing on the back of their successful Chocolate Easter Egg Beer.

“It got us thinking about experimenting with Wild Thing and chocolate flavour – and boy, has it worked! Not only does it taste sensational for us beer nuts, but it makes dark beer far more approachable for a much broader audience of drinkers,” said Mahy.

“People love the chocolate because it’s a flavour that makes people happy, and it removes the bitterness of the original beer that non-dark beer drinkers may not be familiar with.”

The third beer in Murray’s Dark Beer Month is The Night Demon, a strong dark Belgian ale, which was conceived by Newcastle home brewer, Mark Bigland.

“Bigland was awarded Champion Beer of Show for his strong dark Belgian ale at this year’s Newcastle Show Home Brewing Competition. As part of his prize Mark got to brew and bottle a batch of his winning beer with the Murray’s brewing team. And we thought his beer was so good it was worthy of a place in this year’s Dark Beer Month line-up,” added Mahy.

The brewer’s first dunkelweizen, Ronny Dunkel, is the fourth beer in the Dark Beer Month line-up. It will be available as a draught-only beer, providing a lower alcohol, easy drinking alternative to the stronger dark ales.

“Dark beers are becoming more and more popular in Australia, but the trend naturally becomes more prominent in winter. We’re aiming to give people some great reasons to celebrate and get out of the house these cooler months,” added Howe.

Our friends at Murray’s Craft Brewing Co have been kind enough to give away two mixed cubes of their new release dark beers each valued at around $160. To be in the running to win one of the cubes, go to our Facebook page and tell us about your ‘wildest’ beer experience.