By ashailer on June 4, 2015 in Beer & Breweries, Brewer Interviews 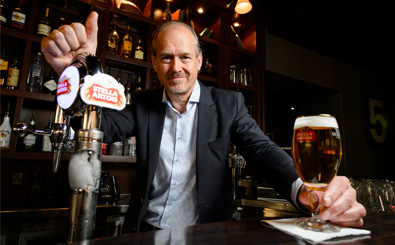 Written by Andy Young from TheShout

Paul Van De Walle, AB InBev’s global master brewer, has told Beer & Brewer that a preference of parallel imported beer over one that is brewed in Australia is ‘psychological’.

Asked what he would think of someone who said they preferred a parallel imported Stella Artois over one that is brewed here, Van de Walle said: “Then they prefer aged beer. It is psychological. I would invite that person just to blind taste a fresh one poured according to our nine-step pouring ritual and one that is a parallel import. I would ask what you think of the taste and the flavours of these beers and I am quite sure that in 99 per cent of the cases people will choose the fresh one, because fresh is always better.”

He added: “For us it is unfortunate that we see some parallel imports on the market here in Australia, and why? Because of the quality. A very important aspect of quality is the taste and the freshness of the taste.

“If some people load containers without us knowing about it and send it on a long trip that can take months to come here, this Stella is subjected to external factors over which we have no control.

“This beer can then be subjected to some extremely high temperatures because it is going from port to port possibly via Singapore or Malaysia, we don’t know. Then it comes here to Australia and it is not fresh anymore.”

Van de Walle does agree with many consumers who say that the imported beer and that which is brewed here do taste different, but he says that the Australian-brewed Stella tastes the same as the beer which is brewed in any one of the 23 Stella breweries around the world, including its home brewery in Leuven, Belgium.

“This recipe and making sure that the recipe is followed here in detail from beginning to the end is my job. That is why I come here every year to check it on-site, but we have on-going controls to check the quality of the Stella and the Becks that is brewed here. They have to send samples every month to the global tasting panel, which we taste. And we make sure that they are still in compliance with our taste quality standards.

“They have to source the hops from the Czech Republic because it is the Saaz hop. The yeast, which is very important in the quality of beer and is a specific Stella Artois yeast, which we do not use in any other beer. Every three months we send the yeast from Leuven, from the original mother strain to all breweries.”

One rebuttal that some would have over Van de Walle’s claim is water. The water in Australia is different to that in Belgium and surely this must have an impact on the flavour of the beer.

“If you take the composition of water, it is 99.99% water and then some minerals,” Van de Walle said. “It is the minerals that make for different qualities in the water, such as calcium, which is the most important mineral in the water.

“This is very easy to keep under control, these calcium carbonates. The other salts are such small quantities when we produce beer, there so many other phosphates and sodium coming from the malts that the original contents within the water are peanuts in comparison to those.

“The only thing that you have to keep an eye on is that the water should be clean, with a very pure smell and taste very neutral. When I get into a brewery I taste the brewing water and then I will also check their records to make sure that every day they are checking their brewing water. This is very important for us.

“So coming back on the calcium and the carbonate levels, this is something that is very easy to adjust. And the malt? If you go to the brewery here, or any of the breweries around the world that are brewing Stella, they have a specific silo for the Stella Artois malt. Because we have specific quality malts for Stella Artois, it’s the same for Becks. So then you have the four main ingredients; you have the hop, which is coming from the Czech Republic, you have the yeast coming from us, you have the malt specific to our requirements and you have the water which is easy to replicate.”

“They are selling aged beer,” he said. “My basic question to retailers would be ‘do you find quality of the products you are selling important?’ Yes or no? If they say ‘no they don’t care’ well, then that’s finished.

“But usually if they are serious about quality and if they say I am at least a little bit proud of what I am selling, then you can start talking about what is quality; what is a high quality beer and what is not. And then I think there is a possibility to convince or invite them to sell the fresher beer.”