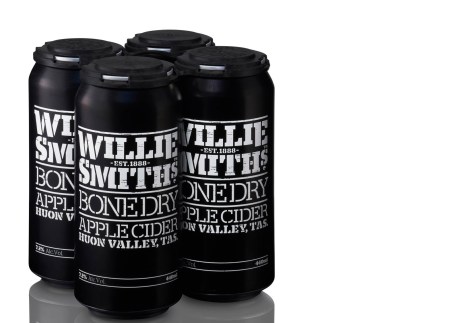 Willie Smith’s is launching its popular Bone Dry cider into cans, the first canning by the Tasmanian cider maker.

Bone Dry officially launched at Dark Mofo, which took place over last weekend (16-17 June), with the cans subsequently rolling out across Australia in June and July, with a $26.99 RRP for a four-pack.

“Affectionately called #bigwillie after the burning man at the Mid-Winter Festival, this is our first foray into cans.

“It taps into the growth of the drier style ciders and gives consumers an alternative to some of the other mainstream ‘hard’ ciders on the market.

“We think it drinks better out of the can than it does on tap or out of the bottle and so we’re excited to see where this goes.”

Willie Smith’s is following the launch of Bone Dry in cans by making its Traditional Cider also available in a 355ml can, which will also have a $26.99 RRP for a four-pack.