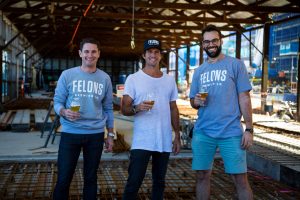 Felons Brewing Co is set to open in October at the Howard Smith Wharves in Brisbane.

Set under the Story Bridge on the banks of the Brisbane River, the brewery will be the first part of a large scale redevelopment of the area. Three other restaurants are expected to open in October as well.

The company dropped in 17 tanks, with installation commission beginning on 1 July. The brewery will be a wholesale and retail site and its name will be painted in giant lettering across the brewery’s roof. Felons head brewer Tom Champion is from Fremantle, but has had stints installing brewery equipment at Little Creatures in Geelong and heading up its brewery in Hong Kong.

“We want to be a part of the Brisbane and greater Queensland brewing community and support its continued growth,” says Champion. “We’re focusing on brewing natural and balanced beers of no fuss, and we won’t compromise when it comes to quality and consistency.”

The origin of the brewery’s name stems from Thomas Pamplett, John Finnegan, Richard Parsons and John Thompson, who set off by boat on a wood-sourcing escapade from Sydney to Illawarra. Strong winds blew their vessel off course and after 21 days at sea, they were shipwrecked on Moreton Island. Months were spent traversing back to the mainland, during which two of them found the mouth of a large river, which theyb explored before settling with a native tribe. When John Oxley arrived in the region to settle a new penal colony, the felons showed him the river mouth, which Oxley named the Brisbane River.

“We fell in love with the story of four felons who were the first – after local Aboriginal Australians – to discover Brisbane River,” explains general manager Ash Cranston, formerly of Little Creatures, Furphy and White Rabbit Brewing. “It seemed to reflect our core values of adventure, freedom and fearlessness, and it made sense to name ourselves after a story linked to the foundation of Brisbane, and the river where our home it.

“Adam, who is one of the founders, was looking for a space to open a brewery and came across this site and thought there’s no better place than on the water to develop a brewery. He ended up developing the whole area. He has a background of developing heritage buildings and spaces.

“We’ve been lucky,” adds Cranston. “We have a garage in our office space and Tom our brewer has been tinkering with our 50 litre kit since March. It’s been a dream homebrew set-up and we’re up to Version 8 of most of the beers. We’re refining the ingredients and getting them ready to transfer over.

“Brisbane is a great city. It’s got a really nice emerging beer scene and plenty of headway to bring more people into smaller brewery worlds. That’s what’s pretty exciting for us.”

“Working with the Felons brewery team to bring the brand to life has been fantastic,” says Adam Flaska, director of Howard Smith Wharves. “The space, which is a key pillar in the HSW precinct, gets right to the heart of our city’s character. it’s a laidback, open-to-everyone spot, sharing a beautifully crafted, premium product against the inimitable backdrop of the natural cliff face.”