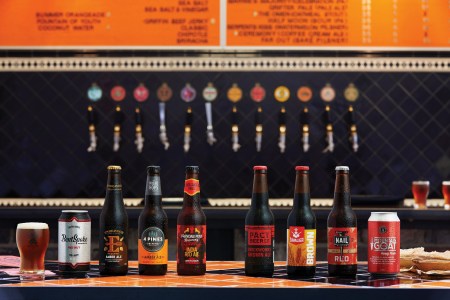 Red, amber and brown ales can be a playground for modern brewers. As Luke Robertson discovered in Beer & Brewer Winter, there are interpretations aplenty for these categories, which are newer than one might think.

Colour is a funny thing in the beer world. A lot of people drink with their eyes and shy away from anything much darker than a pale lager. Throw in the warm climes of the Australian continent and selling people on a red or brown ale probably isn’t the easiest thing. While they don’t pack the roasty heft of a stout, or palate weight of a big Russian imperial stout, the dark tints still make a few punters wary.

Fortunately we have determined brewers making excellent and varied versions of reds, ambers and browns, and they are finding favour with a wider audience. And because these styles of beer are very much up for interpretation brewers can find their own niche and build their own preference in to the final product.

In Launceston, Tasmania, Paul Morrison of Morrison Brewery says they strive for balance in everything they do and put a large focus on traditional styles. Their Irish Red Ale, he says, is their biggest seller and it was the beer that inspired Morrison to move from homebrew to commercial brewing in 2011.

“The recipe we are using now since homebrewing hasn’t changed,” he says. “It’s still the original recipe. We brew beer that we like. We don’t necessarily brew beer for the market; so as long as we are happy with it then that’s the most important thing.”

Morrison uses a combination of Crystal and Munich malts, with a touch of roasted malt for colour, plus English hops, and Irish yeast with a warm ferment to bring out esters. He says for him the approach is all about building up “layers” in his flagship beer.

Another brewery that has a red ale as their flagship is Modus Operandi on Sydney’s Northern Beaches. Like Morrison, Modus’ red ale is unchanged since its launch in 2014. However, its Red India Pale Ale, known as Former Tenant, is a different beast altogether. It may be similar in appearance to the Morrison’s Irish Red, but it’s much stronger (7.8% abv compared to Morrison’s 4.8%), and has a load of New World hops. Co-founder Grant Wearin explains that even though it’s a big beer, like the Morrison Irish Red, balance is still key to the final product. He explains that while many focus on the aroma of the beer, the result of generous amounts of Mosaic and Galaxy as a dry hop component, people might be surprised to learn that it has nine different malts. Wearin says the combination of malt is crucial to achieving the right balance.

“We want it to be layered, complex and we want to support a really heavy hopping regime, and we don’t think we can achieve that with a more simplistic grain bill,” Wearin says.

Like their red cousins, brown ales also offer a chance to play around with personal preference for hops and malt flavour. At Beer Farm, in Western Australia, head brewer Josh Thomas says his team approached theirs with an English influence in mind, and recalls examples such as Newcastle Brown Ale as its main inspiration. It uses a combination of six malts and classic English hop varieties East Kent Goldings and Fuggles. Taking a slightly different approach is Chris Farmer of Mr Banks in Victoria who uses four malt varieties, alongside modern US and Australian hops.

Both brewers, however, speak to the beer being approachable and easy drinking, despite the colour and number of ingredients.