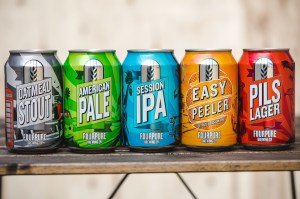 Founded in 2013 by brothers Daniel and Thomas Lowe, the brewery is located in south east London and forms part of the craft brewing hub known as the Bermondsey Beer Mile. Its beers include Pils Lager and Session IPA. Daniel Lowe remains as CEO with his co-founder Tom also staying on with Fourpure.

“Over the past 12 months we’ve been working hard to find the right investment path for the next phase of the Fourpure story,” comments Daniel Lowe. “While in four short years, Fourpure has grown to become one of London’s leading independent modern craft breweries, we knew we couldn’t take the next adventure alone. We met Lion towards the end of our process after a wide range of funding options had been considered and quickly realised we had a shared vision and values.”

“We’re thrilled to have the opportunity to back Dan, Tom and the team to take Fourpure into its next chapter,” says Matt Tapper, Lion global markets managing director. “The guys have done a superb job in getting the business to where it is now and we love how innovative they’ve been in both beer styles and the way they have positioned the brand. We’re making real progress in making our craft beers like Little Creatures available in the UK and Europe and we see some great opportunities to work together to get these and Fourpure’s brews in the hands of more beer lovers.”