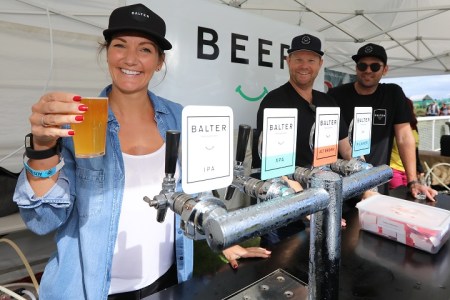 Return flights to Balter on the Gold Coast, an afternoon with the Barrow Boys in Melbourne, and four cases of award-winning Cockies Beer are some of the prizes up for grabs for those attending the sixth annual Great Australian Beer Festival (GABF) on Saturday 17 February.

Hosted by industry stalwart Professor Pilsner (AKA Pete Mitcham) and making use of the Geelong Racecourse’s official track, festival attendees can enter any number of races for their chance at the prizes.

Festival director Kieran Blood said the wacky races were created as a means of engaging with festival goers and creating a fun day.

“We trialed a few [races] last year and it was great. This year we’ve got Balter, Barrow Boys, Yenda, Cockies and even Cryer Malt on board to sponsor a few races with great prizes on offer”, Blood said.

“Winner of the GABS Hottest 100 Aussie Craft Beers, the Balter prize will be sought after with a return trip for two to the Gold Coast, a brewery tour with head brewer Scott Hargrave and a $200 voucher to sample the rest of their brews or pick up a piece of merch.”

The Barrow Boys are offering up their afternoon to take the winner and three of their mates on a tour around Melbourne venues that stock their ales and lagers.

Not to be outdone, the brewers will also get in on the action as they compete for bragging rights in the fourth annual keg rolling championship; last year’s winning brewer was Leigh Bridges from Little Creatures who was awarded the gold trophy and subsequent free site at this year’s event.

For more details and information about the prizes on offer at GABF, check out the festival’s official website.