The unique collaboration brings together the first brewery to set up shop in Melbourne’s western suburbs – Two Birds was established in Spotswood in 2014 – and the women’s branch of the west’s AFL team.

Trail Blazer itself is a crisp, clear and refreshing beer brewed with Australian malt and hops. According to Two Birds, it encapsulates the values that both the brewery and the Bulldogs hold dear: mateship, winning spirit, commitment, effort, hard work and passion.

“I was lucky enough to watch the men win the Grand Final in 2016, so to work so closely with the women’s team on Trail Blazer is awesome,” says Jayne Lewis, Two Birds co-owner and brewer.

“We take pride in being not only Australia’s first female-owned brewery, but also in being the first brewery in Melbourne’s Western Suburbs, and we love what the west has to offer.

“We never set out to be trailblazers ourselves, but we’ve ploughed our own path just like the AFLW has. We’ve always just done what feels right to us, and fits with us as people, and we love working with people who do the same.” 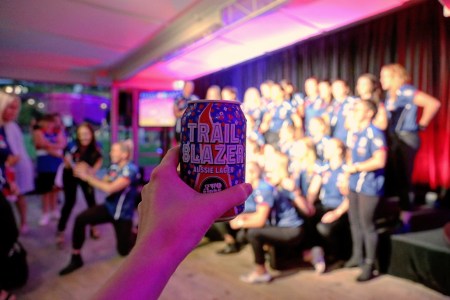 Two Birds co-owner Danielle Allen says building a relationship with the Western Bulldogs has always been a business goal for Two Birds, and seeing it take flight has been a special milestone for the whole team.

“It’s particularly special as the partnership is working with the women’s side, and as Australia’s first female owned brewery, we are immensely supportive of women following their dreams, no matter what history has preceded,” she says.

The new beer – which is also the first lager packaged by Two Birds – will be available at AFLW and VFL games played at VU Whitten Oval during the 2018 season, followed by a wider release across Australia in April.