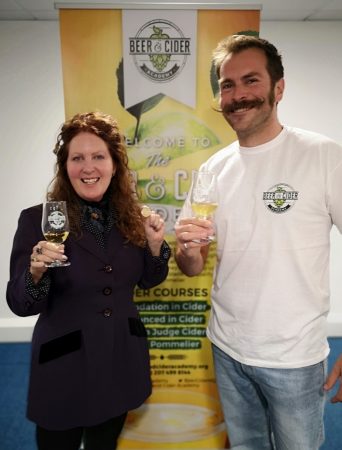 Cider Australia has announced the 2019 Cider Conference (AusCider 2019) will be held in Tasmania from 3-5 June and has named the keynote speaker as the UK’s first accredited pommelier (cider sommelier), Jane Peyton.

Peyton was accredited by the Beer & Cider Academy as Britain’s first pommelier on 25 September 2018. She is also an accredited beer sommelier, an award-winning drinks writer and the founder of the School of Booze.

AusCider 2019 will bring together cider producers, fruit growers, researchers and cider industry representatives from across Australia. This year it will be held in conjunction with the annual conference of Fruit Growers Tasmania (FGT).

President of Cider Australia and co-founder of Willie Smith’s Cider Makers, Sam Reid, said the cider industry is grateful for the support of the Tasmanian Government which has enabled Cider Australia to bring the conference to Tasmania.

“Tasmania is overloaded with exceptional food and drink experiences and has fast become a national hub for fermentation R&D, making it the perfect place to hold the 2019 conference,” said Reid.

FGT’s CEO Stu Burgess said the organisation is delighted to have Cider Australia join them in Hobart for their 2019 Conference.

“The Tasmanian fruit sector has a long history of supporting the cider industry with numerous premium brands producing exceptional value added products for sale at cellar door, domestically and also in high value export markets. In the first week of June, we look forward to showcasing the fantastic profitable businesses right from ‘paddock to bottle’.”

Members of state-based cider industry body Cider Tasmania are delighted that the conference is being held locally and look forward to contributing to making the conference a success. The conference program will include one and a half days at the C3 Convention Centre in South Hobart followed by site visits and events in other regions of Tasmania.

Further information about the conference including program and ticketing information will be released on Cider Australia’s website in early 2019.