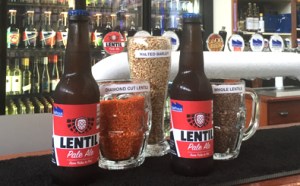 The Lobethal Bierhaus in the Adelaide Hills has released Australia’s first ever lentil beer, hoping to show how the humble pulse can be utilised as a central brewing ingredient.

Alistair describes the Lentil Pale Ale as a fairly low-hopped beer, with a low level of bitterness that “keeps it fairly approachable.”

“What the lentils do is add a slightly earthy flavor,” he told Beer & Brewer. “They also contribute quite heavily towards mouthfeel and body, so the beer has a nice creamy head and sits well in the glass.”

“It’s not intended to be really edgy, it’s intended to show you what lentils can taste like in a beer… I would compare it to a pretty mild, pale ale style, an Australian pale ale without a ton of hop – easy to drink and perfect in summer.”

After successfully partnering with Saskatchewan-based Rebellion Brewing to produce their popular Lentil Cream Ale in Canada – and with 2016 being the UN’s ‘International Year of Pulses’ – AGT decided the time was right to do the same thing here in Australia.

Alistair says that AGT have been “very happy” with what they’ve tasted so far: “They wouldn’t mind doing more, and I’m totally open to that.”

He also has some ideas of his own for future beer innovations.

“I haven’t spoken a lot more about doing other things with AGT, but I’m pretty keen to have a look at doing the lentil beer but using sorghum in place of barley to really try and go the whole gluten-reduced, gluten-free route,” he says.

“I think AGT is pretty keen to do a little bit more so hopefully we can talk them into it.”

The Lobethal Bierhaus’s onsite brewery produces eight core beers, and has a number of other revolving specialties. With a 1200 litre Newlands system and 13 fermenters, they supply around 200 local and independent venues and shops in addition to pouring at their own onsite bar and restaurant.

Whether the Lentil Pale Ale remains a limited run specialty or joins his line-up of regulars will depend on its popularity; Alistair says he’ll “see how it goes”.

At this stage, distribution of Lobethal Bierhaus beers is limited to South Australia. But with a 200-seat restaurant also at the Bierhaus, a trip to the Adelaide Hills to try Australia’s very first lentil beer may just be in order.