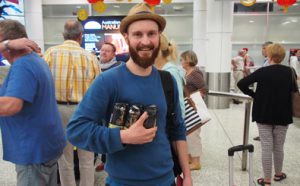 The Australian Brewery has sponsored Maximilian Hammerle, a graduate from one of the world’s most prestigious brewing universities, to join its brewing team as it plans to expand to meet growing demands.

He joins the brewing team at a time when export orders have been increasing. Alongside this the Brewery has secured new national partnerships for the gold medal winning Seis Hermanos Lager at First Choice Liquor and Mad Mex restaurants.

As the brewery edges closer to full capacity with its own range of beer and cider, plans are underway to expand again to meet the growing demand.

Hammerle completed his five year brewing degree from Weihenstephan-Triesdorf University in Bavaria Germany in 2016. He joins Australian Brewery, located in Rouse Hill Sydney, as its new Production Manager and Brewer during a sustained period of distribution and volume growth.

The same post graduate brewing degree in Australia is only two years in comparison, so Hammerle brings with him a wealth of knowledge, quality control and attention to detail that will be a great asset for Head Brewer Dan Shaw and his team.

The brewing and beverage technology degree at Weihenstephan-Triesdorf includes subjects such as microbiology and process engineering and includes lots of hands on experience.

Hammerle said that he is excited to come back to join the Australian Brewery team following completing an internship with the brewery three years ago, .

“I’m excited to come back to Australia and start my career with the Australian Brewery, I made great friendships while doing my internship and love how passionate the team are to make great beer,” he said.

The Australian Brewery opened its doors in 2010 and is independently owned and operated by a family of six brothers. In 2012 the Brewery was the first craft producer in Australia to package exclusively in cans for fresher beer and to be more environmentally friendly. In 2016 the Brewery won two gold medals at the International Beer challenge in London and one each at the Australian International Beer Awards and the Craft Beer Industry Awards as well as a host of silver and bronze.