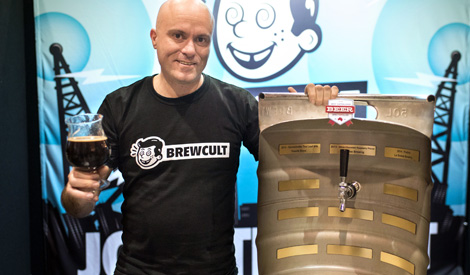 “The response to GABS 2015 in Melbourne and Sydney has blown us away, with both events better attended and more successful than we could have hoped for. We feel it really confirms the increasing interest in craft beer, and the uniqueness of our event,” said co-founder Guy Greenstone.

GABS showcased 118 one-off Festival Beers brewed especially for the event by brewers from around Australia and overseas, with festival-goers invited to vote on their favourite beer to take out the Beer & Brewer People’s Choice Best Festival Beer award.

This year’s winner was Steve ‘Hendo’ Henderson from BrewCult in Melbourne who won with his sweet stout ‘Milk and Two Sugars’ made using cold-dripped coffee and vanilla beans.

If you would like to taste some of the top picks, The Local Taphouse in Sydney and Melbourne will be pouring some of the best festival beers tomorrow (5 June).

Those that voted in the Beer & Brewer People’s Choice Best Festival Beer award went in the running to win five cases of beer from Dan Murphy’s. We’re thrilled to announce that the lucky winner is Stefan Wieser.