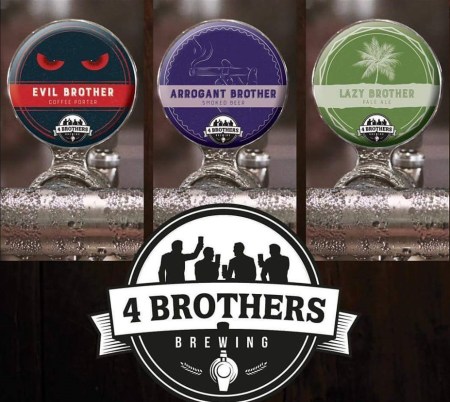 Founder Adrian Cubit told Beer & Brewer that he will be kicking off with four different brews: a pale ale, a coffee porter, a smoked beer/Rauchbier, and a mango IPA.

The 4 Brothers business name follows into the names of the beers themselves, which are called Lazy Brother, Arrogant Brother, and Evil Brother respectively; the mango IPA, ‘Bittersweet’, is the first of the brewery’s seasonal releases.

When asked if the names of the beers reflect the personality traits of his three brothers – who are involved to various degrees in the business – Cubit wisely stayed quiet.

“I’ll leave that one up to the imagination,” he laughed.

4 Brothers Brewing has been nearly two years in the making – “the front page of my business plan says ‘prepared June 2015’” – time Cubit spent working on his recipes while also sorting all of the logistics for opening a brewery.

At the moment, they’re operating with a relatively small setup, and at full capacity should be producing around 16-20 kegs a week.

In terms of future plans, Cubit said he’s definitely got expansion in mind. And while it wouldn’t be possible to expand into bottles or cans with his current capacity, he’s open to one day contract or gypsy brewing at some of Brisbane’s larger craft breweries – which are only an hour-and-a-half drive away.

“That would work out pretty well if any of them have excess capacity – that would be the next thing I want to do and then eventually expanding our own facility up to 10 times of the size of what we’ve got at the moment.”

For now, he’s got a few more season releases in the works: a pumpkin spiced ale using local pumpkins from the nearby Lockyer Valley and a honey wheat beer.

“We’ve just advertised not long ago for a brewer and we’ve already done some interviews, so once we get another brewer in they might have their own ideas for different beers as well,” he added.

According to Cubit, the craft scene is only growing in Toowoomba, which has a population of around 120,000.

“Two or three of the pubs here specialise in craft beer, and there’s a craft beer festival up here as well called Brewoomba which has been on for two years now.”

The brewery will officially open its doors on Saturday and Sunday this weekend (29-30 April), and with nearly 500 people expressing interest on the Facebook event, Cubit looks to be in for a busy weekend.

“It will be the first taste for everyone in town, and I think our capacity is about 50 people so I think we’ll be pretty full both days – hopefully everyone spreads out the times that they come!”