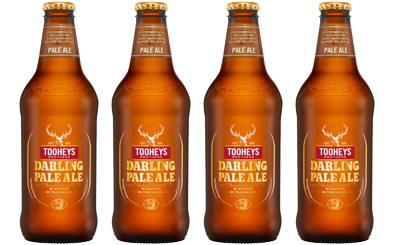 Tooheys has launched a new beer, Tooheys Darling Pale Ale, and is rolling out a refreshed look to its entire range.

Created in response to the rise in popularity of the pale ale style, Tooheys Darling Pale Ale has been crafted with a “non-challenging flavour to make it accessible to new pale ale drinkers.”

Tooheys Darling Pale Ale is named after the first Tooheys Darling Brewery, which was located in Sydney’s Darling Harbour. The brewery was purchased in 1872 by John Thomas Toohey (an Irish immigrant) and James Matthew Toohey who moved to Sydney in the 1860s after running pubs in Melbourne to brew their first beer Tooheys Black Old Ale, known today as Tooheys Old Dark Ale.

“Tooheys’ mission is to brew easy drinking beers for every taste. We know that our adult drinkers have an evolving palate, so we are committed to innovation and providing greater choice that suits more occasions, just like the Tooheys brothers did back in the 1870s,” said Tooheys brewery director, Mark Toomey.

Lion brand director Tanya Marler believes this launch is an exciting step for the brand and will be well-received by drinkers.

“In 2014 there was a massive 18.8 per cent growth by volume in pale ale. Our new offering shows that we are proud of our heritage, but also want to remain relevant for today’s modern beer drinker,” Marler said.

“It’s also nice for us to be able to pay homage to the Tooheys brothers and their Darling Brewery in this new brew. They came to Sydney to have a go at brewing and took a punt on the Darling Brewery’s success. Almost 150 years on, it certainly paid off.”

Check out a video of the first Tooheys Darling Pale Ale rolling out below.