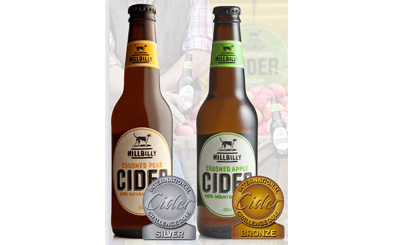 Producing both pear and apple ciders, the Hillbilly pear was awarded a silver while Hillbilly apple secured a bronze.

This year’s competition attracted a record number of entries from traditional cider nations such as the UK, Ireland and France, as well as Australia, Canada, Croatia, Japan, Poland, Spain, South Africa, New Zealand and the USA.

The Hillbilly brand is the creation of Bilpin residents, cider makers and husband and wife duo, Shane and Tessa McLaughlin.

Shane McLaughlin was pleased with the international win, saying it was great news and further ratification following their recent medals at the Australian Cider Awards in October last year, where the pear was awarded ‘Best in Class’ and the apple, a silver medal.

“We are excited that Hillbilly has shown up so well amongst the best ciders in the world,” he said.

Judge Pete Brown praised the consistent quality of the entries in the competition.

“I think we were quite tough as a judging panel,” he said. “But every product we awarded a gold or silver medal is a great example of what cider or perry can be, worth holding up and showing to anyone who thinks that cider can only be murky, pungent scrumpy or an exceedingly sweet fruit cocktail.”

Shane McLaughlin’s commitment to making cider in the most natural way has gained Hillbilly a loyal fan base not only across its home turf of the Hawkesbury and Blue Mountains but further afield in Sydney, Melbourne and Queensland.

“The way we make cider – it’s all about the apples – and the quality of the local fruit in Bilpin makes us look good,” he said.