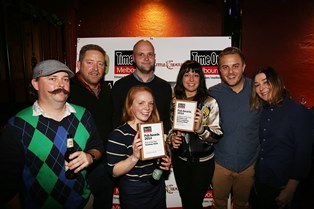 More than 200 punters, publicans and industry heavyweights were at Collingwood’s recently revampedGasometer Hotel on Monday for the inaugural Time Out Melbourne Pub Awards.

Hosted by Good Beer Week co-founder Miro Bellini, the evening also marked the launch of the first-ever Time Out Melbourne Pub Guide – a definitive new list of the top 50 pubs in the city.

Brunswick’sEdinburgh Castle took out the Family Friendly Award. The Yarra Hotel was awarded Best Entertainment, while the Savoy Tavern picked up the Revival Award.

Fitzroy stalwart the Rose Hotel won the Legend Award, with Matt and Melanie from the warm and friendly Reverence Hotel awarded Publicans of the Year.

St Kilda’s Local Taphouse, which has more than 300 different beers available every year, picked up the People’s Choice Award.

“Our pubs tell the story of where Melbourne has come from and where we’re going,” said Gemima Cody, Time Out Melbourne’s Food and Drink Editor. “They’re both time capsules and industry leaders in supporting local brewers, spirit-makers and musicians. That deserves recognition, and those are stories we want to tell.”

This time around, it was Time Out’s turn to put on a spread, with brisket tacos, beef sliders and fried pickles paired with Little Creatures pale ale, pilsner and Rogers’ ale, and Apple Thief Cider’s Granny Smith, William Pear and Pink Lady varieties.