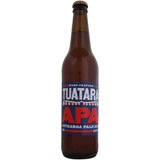 Carl Vasta and the Tuatara team are making big inroads into the New Zealand market. The Tutara brand has received a huge makeover with some extremely special bottles that are an absolute winner. The beer itself has a large white fluffy head with a nice consistent haze and a dark, orange colour. As you would expect with a Kiwi Pale Ale there is aroma in spades, citric, grassy and herbaceous. A good toffee like malt character and a crisp, clean, lingering bitterness delivers on the promise the aroma sets up.