New gypsy brewer, Sydney Beer Co., has taken the somewhat brave step of launching a lager as its first beer.

Tricky and time-consuming to craft, this lager has been designed to suit ‘Sydney’s lifestyle’ according to co-founder, former Sydney bartender and consultant Matt Siely, and business partner David Maronese.

“We wanted to give people the opportunity to drink a sessionable Sydney beer that matches Sydney’s lifestyle. Most importantly, our goal was to create a premium beer Sydneysiders can be proud of: a great tasting, easy-drinking, refreshing lager that’s fit for Sydney,” explained Siely.

Maronese points out that, “Sydney Beer Co. is following a growing overseas trend of brewers from New York and London that are leveraging an association with their neighbourhood. After living abroad for a decade, and seeing what was happening in these cities, it was puzzling to think that Sydney didn’t have a beer to call its own. That void really pushed us to craft this brand.” 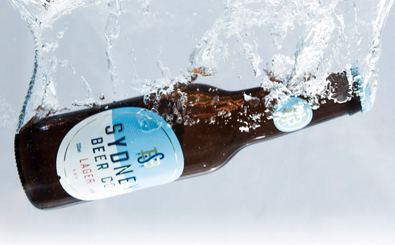 With a distinctive blue and white label, the lager is described as ‘crisp and refreshing’ and has been brewed with all-Australian ingredients.

A blend of two malts and roasted barley create a “light hopped finish with a subtle hop aroma of melon and peach.”

Sydney Beer Co. Lager is the only style being crafted at this stage and has a 4.5% ABV, 15 IBUs and is currently available in a 330ml bottle.

“Expansion will be into kegs and cans hopefully early 2017,” Siely told Beer & Brewer.

“Currently stocked at Bulletin Place, Bennelong Restaurant, This Must Be The Place, Uncle Ming’s, The Barber Shop, Fonzarelli’s and Bar Zini.”