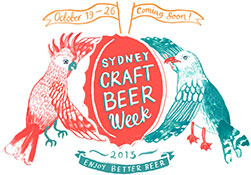 Sydney Craft Beer Week 2013 is on the horizon and to say that the beer community and beer fans are excited is a tiny bit of an understatement.

With the launch of the program officially taking place on Monday 2 September, we sat down with one of the organisers, Todd Venning from beermen.tv, to get a sneak peek at just what is in store for beer novices to beer nerds this October…

SCBW was a massive success last year, what can attendees expect this year?

There is a real buzz around the state and the craft beer market has grown rapidly. This is evident from the number of venues and breweries now represented that didn’t exist last year! With new faces comes new ideas and alongside the healthy competition, the ‘bar’ has been raised this year. When we first started SCBW the calendar was predominantly comprised of delicious beer degustation dinners. This year you will struggle to find any two events that sound similar.

Quality over quantity is a focus for 2013, what does that mean in practical terms for beer fans?

Beer fans will have the opportunity to attend more beer launches and sample a greater array of new and unique craft beers than they have ever been able to in this state before. Local, interstate and international breweries plus the diverse range of venues involved have worked hard to make Sydney Craft Beer Week the biggest single vehicle for promoting craft beer and real beer choice for New South Wales.

You mentioned that there was a focus on attracting non-beer drinkers – how have you worked with breweries and venues to do this?

We challenged breweries and venues to come up with different ways to showcase craft beer and in doing so, create opportunities for showing people that beer has limitless flavour. There will be community food festivals, art shows, live music performances and also a solid representation of events aimed at beer education for those new to craft beer.

Beer Mimics Food is again a big focus this year what can punters expect?

We can’t give everything away just yet but we can say that the response from our first Beer Mimics Food theme last year was so positive we’ve taken it national. Eight breweries across five states will battle it out at a single event, in what is now our annual challenge to breweries and Australia’s top culinary talent to create beers that taste like well-known foods or signature dishes. Last year we had Pepper Steak Porters, Fruit Pie Ales and even a beer brewed with French seaweed. This year, it’s safe to say that the laws of beer physics, and your grandmother’s family cookbook, are about to be broken.

How many events are on the calendar (if you’re willing to say?)

Over 60 events across more than 40 venues – says it all I think.