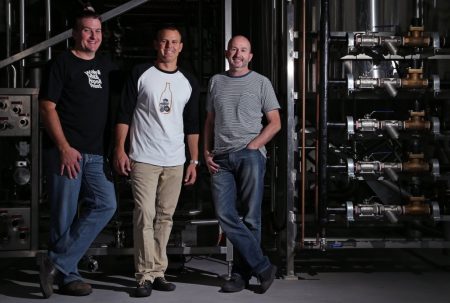 Stone & Wood Brewing Company’s journey to becoming the most successful brewing start-up of the modern era is explored in a new podcast documentary released this week.

No other breweries have come close to this feat in recent history other than Little Creatures.

The WA brewer was smaller in size than Stone & Wood when it sold to Lion in a 2012 deal that valued the company at about $380 million.

“If you look at, let’s say the last 70 years of the Australian brewing industry, there’s only been a handful of regional brewers that have actually grown from their own home base,” Stone & Wood co-founder Jamie Cook told the podcast.

“Coopers would be one, James Boag’s, Cascade Brewery and Little Creatures, are a cluster of brewers that have probably jumped from being a small regional player to something on a national basis,” he said.

“So, I guess we’re probably in that club.”

In the documentary, Cook and Stone & Wood co-founders Brad Rogers and Ross Jurisich make it abundantly clear that they have no intention of selling Stone & Wood, which they intend to be a generational business.

“At the moment there’s 75 employees, nearly 70% of the business that owns shares in Stone & Wood and that number will continue to grow every year,” said Cook.

“In 20 years’ time, it could be the Coopers of the East Coast. That’s probably our ambition, to be a regional brewer, and if it takes us five years, ten years, 20 years to achieve that, then so be it.”

Season Two begins with the Stone & Wood story on Thursday May 9, with an array of beer, wine and spirits topics to follow in subsequent weekly episodes between now and July 2019.

The podcast was created by drinks writer James Atkinson, former editor of TheShout and Australian Brews News, and winner of the 2017 AIBA media award.