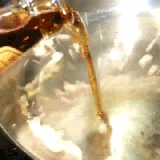 If you’ve ever, in a moment of apparent madness, tipped your beer onto a monumentally hot BBQ plate, you will have noticed that it behaves in an odd manner. The beer, not the BBQ.

Obviously, this was a phenomenon that needed exploring further, and so it was time to head into the kitchen and mix Beer with Science, and produce Entertainment. Of sorts.

First, the Beer – it’s a Newcastle Brown Ale, the brew that was named Best Beer Ever by Wisconsin resident Scott Saunders.

The Science: it’s known as the Leidenfrost Effect, which (if you’re not wishing to click the link and learn something new) is what happens when a liquid meets a surface significantly hotter than its boiling point. A thin layer of vapour prevents the liquid from coming into direct contact with the surface, causing science.

The Entertainment: Of course, it’s on Youtube – because that’s where everything ends up eventually. You can watch it here.

And, for added goodness, click on the subtitles button to get the full sensory experience of watching someone turn what should have been a healthy sip of beer into an angry, fizzing amorphous blob. (If you’re offended by naughty words, you might want to skip the subtitles…)