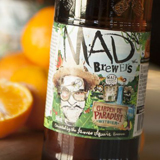 Mad Brewers (NSW) has unleashed its latest limited release, a witbier called Garden de Paradisi, and it looks like it’s going to be one worth lining up for.

They’ve taken the normally quite sedate witbier marque and added a dash of the tropics, and a handful of Caribbean voodoo to create the new brew – and the key ingredient is a West African native spice called Grains of Paradise, which is often used by witch doctors in their rituals… It’s also been ramped up with mandarin peel and lime, making for a proper summer brew.

For those not in the know, the Mad Brewers are the team from Malt Shovel Brewery in Sydney, who will sometimes stay back after dark to perform experiments – with results like this.

It’ll be available for a strictly limited time in 568ml bottles (RRP $70 / 12 pack) and on tap in selected locations.For more information, check out the Malt Shovel Brewery blog.