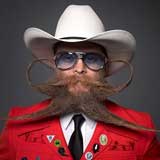 Imagine, if you will, a scenario where an Associate Professor is fired, simply because his face appears on a beer can. That’s the story doing the rounds at the moment in the United States – and while this section of the website is usually reserved for something funny, this week’s story falls well and truly into the ‘so weird that it doesn’t make any sense’ category.

So here’s the yarn: Dr Paul Roof (pictured above, possibly being attacked by an amorous starfish…), Associate Professor at the very conservative Charleston Southern University in South Carolina, sports a particularly striking beard and moustache. Indeed, he’s well known among the facial hair aficionados of the United States – and it was at a gathering of such individuals that he had his photo taken as part of a facial hair competition.

A few weeks later, his face appeared, adorning the can of local brewery Holy City Brewing, causing much concern amongst the Baptist hierarchy of the University where he was teaching. The end result – Dr Roof was fired from his position. This is despite Roof’s claims of innocence, and that he didn’t know that his image was going to be used on the cans.

It boggles the mind that someone could be fired over something so minor – if this happened in Australia, we have little doubt that the Professor in question would have immediately been promoted to Vice Chancellor for his efforts…

Read more about the story here.