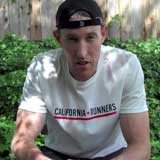 The world record for the Beer Mile (which is now apparently a thing…) has been smashed by Canadian man James Neilson in the US of A. Neilson has become the first person in history to run a sub-05-minute mile, stopping every 400m to chug a can of beer.

As silly as that might sound, it’s actually quite an epic feat, considering that a sub-05-minute mile is beyond most people’s abilities – let alone when you need to pull over every 400m and throw a beer down your neck as quickly as possible.

Needless to say, this feat took training, so don’t try it at home… unless you happen to have an Olympic-sized running track, sturdy legs, four cold beers and an ambulance on speed dial for when it all goes horribly wrong.