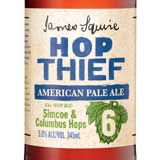 The Malt Shovel Brewery has unveiled the latest iteration of its Hop Thief brew, marking the sixth different version of a beer specifically designed to showcase new or fresh seasonal hops. For version six, the team has turned to both Simcoe and Columbus hops to put together the American-style Pale Ale.

“What we’re doing with the Hop Thief varietal series is truly exciting, ground-breaking work. The series offers a beer that evolves with each release by using unique hop recipes, every time. Not many other beers in the world can attest to that!” said Jeff Potter, Head Brewer at the Malt Shovel Brewery.

“When drinking Hop Thief 6 American-style Pale Ale, beers lovers can expect an initial taste of malt sweetness on the palate,” Potter continued. “This is accompanied by passionfruit and pine-needle aromas from late hopping with Simcoe and earthy, spicy notes from Columbus hops. This gives way to a distinctive cleansing and refreshing bitterness.”