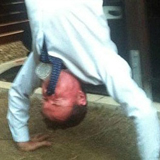 This could well turn out to be little more than a storm in a pint mug, but Queensland MP Andrew Laming has drawn a ton of flack from around the nation for celebrating Australia Day by chugging a beer – while doing a handstand.

“It wasn’t dangerous, in fact it was well-received,” Laming told journalists when contacted about the stunt. “You’ve got to be a bit mean spirited to criticise someone drinking a beer just because they’re upside down.”

Given that we are, as a nation, known for loving a beer or two – and with a former Prime Minister whose major claim to fame is a world-record for slurping down 2.5 pints of beer in 11 seconds – it’s hard not to feel slightly proud that our politicians aren’t afraid to get into the spirit of things on Australia Day… by downing a beer while doing a handstand.