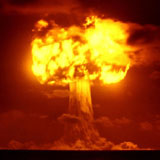 We all know that beer is inherently tough. It’s tough to make, some of them are tough to drink – and many of us secretly believe that drinking beer somehow imbues us with some of the toughness eachy and every glass or bottle carries with it.

But precisely how tough is beer? Well… let’s just say that in the event of a nuclear holocaust, provided you manage to survive, you’ll be very pleased to know that the beer you’ve got in your fridge will probably fare better than you.

We know this because of part of the United States’ Nuclear Defence Agency’s “Operation Teapot” – which sought to find out what would happen to the world if it suddenly started raining enriched uranium and massive explosions.

Project 32.2a, specifically, looked at what would happen to beer (and soft drink) if it were subjected to a nuclear blast – ostensibly to find out what survivors of a nuclear conflict would be able to drink if the water supply was irradiated. The results of that project were startling: provided the beer was more than 1270 feet (about 400 metres) away from Ground Zero, and the bottles weren’t hit by flying debris, then the beer inside would be perfectly safe to drink – and wouldn’t even taste funky, either.

So in the event of a nuclear war, we suggest the following procedure: stack all your bottled beer around you to form a makeshift bunker, and sit inside drinking beer until everything’s okay again. Simple!

For more info – and the actual science behind all this – check out Alex Wellerstein’s Nuclear Secrecy blog.