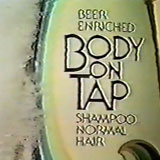 The year was 1978, and it was a golden time for inventors. America was riding a financial wave of success, and Americans were in the mood to buy stuff. Lots of stuff. in fact, lots of useful and simply ridiculous stuff. Like this shampoo, called Body on Tap, and as the commercial says, it’s “made with 1/3rd Real Beer… but don’t drink it!”

Added bonus – the spokesmodel hired to tell America that washing their hair with beer enriched shampoo is a good idea was a young Kim Basinger, who went on to become a Bond Girl and a major Hollywood star – possibly because of all the beer she rubbed onto her head in 1978.

Click here to check out the advertisement for yourself.