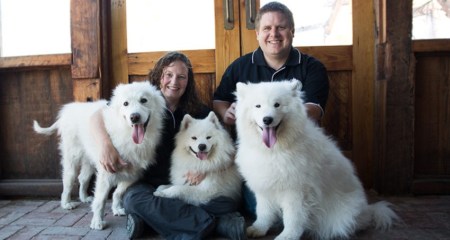 South Australian brewer Smiling Samoyed has taken home the Most Outstanding Beer in Show at the 2019 Royal Adelaide Beer, Cider & Spirit Awards – the third time in five years their ‘Dark Ale’ has won the award.

The Awards were held last Friday evening (12 July) at the Adelaide Showground as part of the Adelaide Beer & BBQ Festival, which ran through to Sunday 14 July.

This year’s awards attracted 387 entries from 83 breweries and distilleries from across Australia and New Zealand.

Myponga-based Smiling Samoyed and its co-owners Simon Dunstone and Kate Henning were delighted with their success, also winning Champion Other Ale with their Dark Ale.

Described as a celebration of the darker malts, the husband and wife team add six different specialty malts to their 4.3 per cent ABV Dark Ale to produce a blend of roasted, nutty, dark chocolate and coffee flavours.

“Friday night’s win was very special,” says Corinna Steeb, CEO and co-Founder of Prancing Pony. “We received recognition for a beer style that is not easy to make in a smaller brewery set up, as you just can’t hide mistakes in that style of beer.

“Our Indie Kid Pilsener is super crisp and an easy drinking beer. A Pilsener is a beer style that can be enjoyed by beer geeks as well as by more traditional beer drinkers that want to explore the craft beer space and it’s definitely a beer style enjoyed by winemakers, they tend to drink it to cleanse their palate.”

Check out the full results from the Awards below.

THE ECOLAB MEDALLION for CHAMPION OTHER ALE sponsored by Ecolab

THE ANDALE MEDALLION for CHAMPION STOUT BEER sponsored by Andale