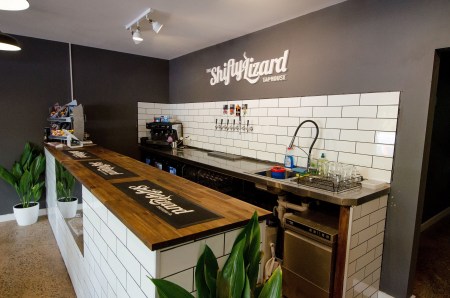 Shifty Lizard Taphouse recently opened in the town of Willunga, around 40 minutes south of Adelaide in the famous McLaren Vale wine region.

Co-founders of Shifty Lizard and long-time friends Lee Stone and Danny Strapps released their first beer just over a year ago, but until now had been brewing on a small 100L system – and contracting production of their popular pale ale to nearby Vale Brewing.

But with the help of a few investors, last Friday (19 January) they opened the doors of their very own Shifty Lizard Taphouse – complete with a 600L microbrewery out the back.

‘Branding maker man’ Danny Strapps explained to Beer & Brewer that not only does his business partner Lee Stone handle the brewing side of the equation, he was also responsible for the brewery’s unique name.

“[He] wanted to call it something ‘Stone’, but realised obviously pretty quickly that nearly every brewery under the sun uses that word. So he decided to use his call sign for Call of Duty and games like that, which was Shifty Lizard.

“My illustration style also fits with his vision, so we just started working together a lot closer, and Shifty Lizard was born.”

The compact Shifty Lizard range of four beers – including an IPA, a stout (‘Stouty McStout Face’), a red ale (‘Hoppy Irish Red Ale’), and a pale – is described by Strapps as “easy drinking, not too heavy and not too full on – Lee’s big thing is that he loves to have a session, and we’re all about having a good time and sharing a beer with mates.”

Unsurprisingly then, a session ale and NEIPA are both on the cards for the near future, making use of the 10 tap capacity that their new bar offers.

Strapps cheekily describes the feel of the space – with its dark charcoal walls, plants, timber tabletops and white-tiled bar – as “sort of like a Melbourne café two years ago, which is probably three years ahead of Adelaide.”

And while the 75-person capacity Taphouse doesn’t have a kitchen, Strapps says they’ll be serving cheese and cured meat platters to match with each of the Shifty Lizard beers.

After its official opening on Friday, the Taphouse also profited from its location on the route of stage five of the Tour Down Under on Saturday, proving a hit with the lycra set.

“We’ve had a lot of local interest and we saw a lot of locals on the first weekend, but the craft beer community in Adelaide has grown quite big and we’re definitely going to have a lot of those guys coming up the hill,” Strapps added.

“We also expect to have a lot of wine tours jumping on board, and there’s also a couple of craft beer tours starting to float down our way because of all the breweries starting to open down here.”

For now, Shifty Lizard beers are only available in South Australia – as well as three or four venues in Victoria – but according to Strapps, the duo have expansion in mind.

“I think once the Taphouse is all up and running, and we’ve got the right staff looking after that, we’re definitely going to push for national [distribution].

“The future for us is cans, we’re just not sure when that will happen, but we want everything to go to can.

“It might be summer next year, but it will really depend… we definitely want to look at a national audience within the next 18 months.”