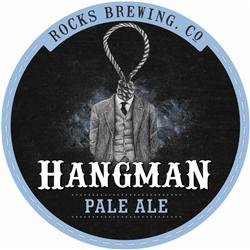 Rocks Brewing Co’s most popular kegged beer will be available in 330ml bottles from 11 March, 2013.

Coming up to the brewing company’s fifth birthday – and celebrating the third anniversary of the three-schoonered Harts Pub – Mark Fethers, founder and MD, says that the team though it was high time their fans could take a six-pack of The Hangman home.

“Hangman Pale Ale is our most popular beer and holds a special place in all our ‘Harts’,” he says. “After four years we knew it the right time to get The Hangman to a wider audience. When we considered the option of bottling, the Pale Ale was the natural choice from our range of draught beers”.

Dry hopped with Liberty and Cascade hops and with a nice whack of Australian malt, the brew is an American-style Pale Ale: big, brash and bitter.

The Hangman will be available in cases of 24 x 330ml bottles at small independent bottle shops.

Aroma : Citrus from the use of American Liberty and Cascade hops

Taste : Bitter, malt and hops … and a few more hops

Available from good, independent liquor stores – if you can’t find it, email beer@rocksbrewing.com to find the closest stockist.