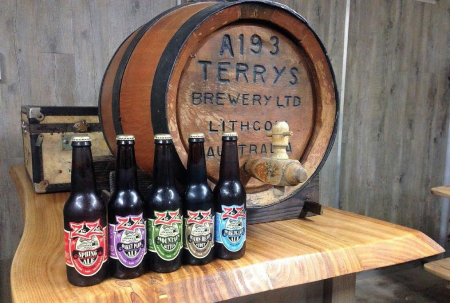 If you’ve ever dreamed of moving to the mountains and turning your homebrewing passion into a career, then now is your chance.

Colliers International has been appointed to facilitate the sale of The Zig Zag Brewery, Lithgow Valley Springs and a unique mountain property with an 18 megalitre water licence.

The property and business is being offered to the market as a freehold going concern, and is expecting to fetch a sale price from $4.5 to $6 million.

It follows the success of other local property sales such as the Tattersalls Hotel in the Main Street last week.

Colliers International Agent Peter Seeto has been appointed to sell the property and told Beer & Brewer that there has been interest from onshore and offshore business developers, property developers and local community groups.

He said that the history of the property and the business strength in the community make it an attractive purchase.

The 40 Acre property at 1b Brewery Lane Oakey Park, Lithgow, NSW is being sold for the first time in 36 years.

Current owners Adrian and Malina Schindler have grown up at the property that their father purchased it in 1981. They are passionate about the products they produce and the local community they support.

Lithgow Valley Springs supplies most local businesses in the area with fresh spring drinking water and a range of consumer water products. The Zig Zag Brewery is Adrian’s passion, and he’s developed brews with a focus on tourism with a rich history dating back to 1888.

Colliers International’s Seeto said: “Adrian’s passion for the property, his staff and community, illustrates the success of the business we are presenting to the market seeking a like-minded inspirational buyer to be found during this process. The business currently employs 18 exceptionally good local staff and it is expected this will continue upon the successful sale.”

The Zig Zag Brewery was first built around 1888 upon a well-known spring water source deep within a steep sandstone valley on the outskirts of the small Lithgow coal mining community.

It was developed over a period of 65 years between 1888 and 1950. The site hosted a number of brewing operations and was the last regionally-based brewery operating in NSW. The Old Zig Zag Brewery became one of the largest and most famous breweries west of the Great Divide and was also known as Terry’s Brewery. It maintained its popularity until the late 1950’s when the last brew was made.

Even in its early years the spring water was considered to be a crucial ingredient in the delicate art of brewing a fine ale and the brewery achieved further distinction in the 1950’s when its stout won a world championship award in London.

The brewery went on to be used for soft drink production as the home of Dales Soft Drinks in the 60’s and 70’s and in a rather tired condition was finally purchased by the Schindler family in 1981 as a holiday retreat and weekender, with the spring water business commencing in 1991.

As the business grows more of the original buildings are being put to use for production and warehousing, rapidly escalating the rate of restoration of the site. This restoration and re-utilisation of the site is not only important to the company’s marketing strategy but the local Tourist Association plans to list the brewery on their tourist route. Already tours of the property are conducted almost every week for visitors from far and wide.