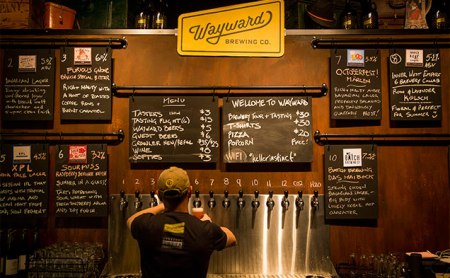 Craft breweries in Sydney’s inner west will be allowed to trade like bars in a trial that could be expanded across NSW, Minister for Racing Paul Toole has announced.

“Microbreweries are currently only allowed to offer tastings, unless they obtain a special ‘drink on premises’ authorisation, as well as council approval,” Toole said. “This trial will cut red tape and allow beer lovers to enjoy more of their favourite drop.”

The news was received warmly by the independent brewing industry at the Independent Brewers Association’s (IBA) annual conference, BrewCon, which has taken place this week (26-28 June).

“There’s going to be a new category of liquor license created strictly for microbreweries,” Peter Philip, Wayward founder and IBA board member, told those gathered. “It’s going to make setting up a taproom much, much easier and much more sensible, and should streamline things for NSW breweries.”

“This is something that I’ve been working on along with the other members of the Inner West Brewery Association – as some of you know we formed about a year ago to lobby our local government, but we’ve also been doing some state-based stuff – because the liquor licensing in NSW for microbreweries is kind of broken, and not as good as in Victoria or South Australia.

“We had no voice before, now we’ve got great support from our local government the Inner West Council, and we’re actually getting a lot of attention at a state-based level. They’re listening to us.”

The trial will run for 12 months in the Inner West Council area, which has the highest density of microbreweries in the country.

The new type of liquor authorization, with streamlined approval, will be trialled; conditions include a patron limit of 100 and a requirement to make food available.

“The rising popularity of boutique and craft beers, ciders, spirits and liqueurs is creating new demand for enjoying drinks produced on the premises,” Toole said.

“A lot of people like the concept of being able to sample high-quality locally made drinks and speak directly with the passionate experts who produce them.”

The trial will also apply to producers of spirits, liqueurs and cider.

“Microbreweries don’t neatly fit into traditional liquor licence categories, so there’s a need to develop a new model suited to them,” Toole added.

Like small bars, microbreweries are considered low-risk businesses for alcohol-related harm. According to the Minister, having a specific new authorisation type with clear conditions will help create certainty for businesses as well as Liquor & Gaming NSW and police.