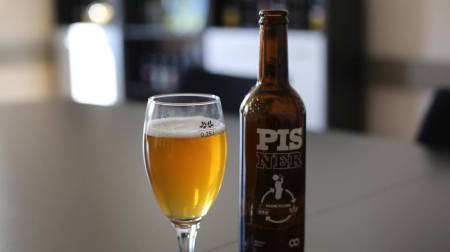 Danish brewery Norrebro Bryghus has made international headlines for its latest beer, which has been made using 50,000 litres of human urine collected at the largest music festival in Northern Europe.

Dubbed the ‘Pisner’, the beer doesn’t actually contain any human waste, but is produced from fields of malting barley fertilised with the urine ‘donated’ by festivalgoers at the Roskilde Festival.

Barley is traditionally fertilised using animal manure or factory-made plan nutrients, but the urine yield from the festival was nonetheless big enough to fertilise 11 tonnes of malting barley, and brew 60,000 bottles of the beer.

The urine was collected at the festival in 2015 by the Danish Agriculture and Food Council, and was used as a fertiliser in the spring of 2016; the brewing process began in March this year and the finished product will be available to taste in June.

“When the news that we had started brewing the Pisner came out, a lot of people thought we were filtering the urine to put it directly in the beer and we had a good laugh about that,” said Henrick Vang, Chief Executive at Norrebro Bryhgus.

Karen Hækkerup, CEO of the Danish Agriculture and Food Council, said: “Just as we have seen shops sell goods that would otherwise have been thrown out, Beercycling allows us to recycle a product that is normally flushed down the drain.

“When it comes to circular economy, Danish farmers are some of the best in the world. If you can brew a beer with urine as a fertiliser, you can recycle almost anything.”

So, who fancies a bottle?