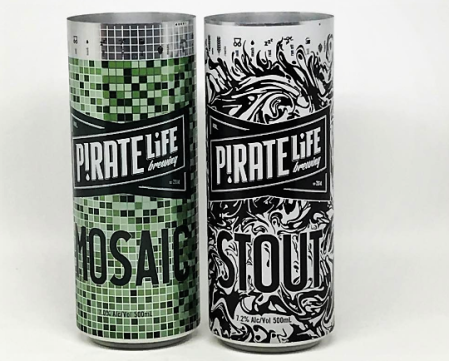 Pirate Life will be releasing its Mosaic IPA and Stout in 500ml cans over the coming weeks, in exciting news for fans of the popular Adelaide brewery.

Until now both beers have only been available on tap; the Mosaic IPA debuted at Pirate Life’s second birthday party in March, while the Stout was first released early last winter.

Jared ‘Red’ Proudfoot, Pirate Life Co-founder and Head Brewer, told Beer & Brewer that The Mosaic IPA has been hugely popular since its release only three months ago, and continues in the Pirate Life signature, hop-forward style.

“I think it’s a stonking beer. I love it, but I haven’t gotten to have it that often because until now it’s been on keg – but as soon as I find it somewhere I’ll sit on it for most of the afternoon or evening,” says Red.

“It’s well-loved at the brewery and every single time it’s been on keg somewhere that keg has run out within a couple of hours. We did two kegs of it over in WA at an event and both of them were gone within maybe an hour and 15 minutes.

“The beer just flies on tap so it just made sense to put it into cans. We decided to brew a 100 per cent Mosaic IPA for our birthday, kind of to see how it would go… but as soon as it got the reaction it has, it just made sense.”

The Mosaic IPA is quite light on malt profile, allowing the hop to shine. Red explained that to brew the beer, there’s a “super late” hop addition mainly into the whirlpool, making it a lot juicier and leaving only a mild bitterness.

He also explained that with Pirate Life being a largely package-focused brewery, it was important to get two of their popular keg beers into can for wider distribution.

“The Stout last year was only in kegs and we got it around to a few places, but as we’re a package brewery and not so big in the keg arena, getting it into can will be pretty important for us. I’m also looking forward to being able to have a few tins at home myself as well!”

He describes the Stout as a “classic mid-2000s US-style stout”, nice and dry with good malt integration and warm, roasted flavours.

“It has to taste like a Stout – it can’t taste watery – but on the other hand it can’t be too chewy or cloying. I think it’s pretty well-balanced.

“It also broadens the outlook on what we make a little bit, we make a lot of hoppy beers so going for something a bit more malt-driven that’s still flavourful and getting it out there in cans is great.”

Both beers will be packaged in larger, 500ml cans, the same size as Pirate Life’s IIPA – second in the Gabs Hottest 100 last year.

“Big beer, big can is the thinking behind that,” Red explained. “These are the kind of beers which are a bit more of an indulgence beer, where you’re probably only going to have one or two cans at a time.

“They’re also big enough to share with a mate if that’s the way you want to go. I just like having the option of the bigger tins and they also present really well – I can’t wait until the two new cans get here, it’s always exciting when we get new artwork.”

The cans are in the final stages of printing, and the beer is sitting in tank ready to be filtered and packed next Monday. Red says they’ll be available nationwide – with SA shops obviously the first to receive delivery – and that they’ll be favouring independent stores in terms of distribution. So keep an eye out over the coming weeks.

“I’ve actually played around with a few different percentages and I think probably 70 per cent Mosaic and 30 per cent Stout would bring it to where we want for a Black IPA.”