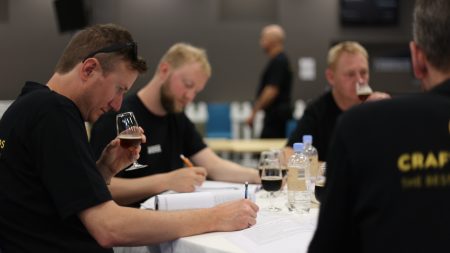 Entries for the 2017 Craft Beer Awards are closing this Friday 9 June, with this years awards night earmarked to be the biggest yet.

The Craft Beer Awards judges eight categories with trophies being awarded to the best beer in each category. The trophy winners are then judged against each other with the winner taking the prestigious title of Champion Australian Craft Beer.

Full details of the Craft Beer Awards including style guidelines and entry fees are available from the conference website.

The Craft Beer Awards are organised by the Craft Beer Industry Association (now the Independent Brewers Association) and are the only national beer competition dedicated to showcasing Australia’s craft beer industry.

Judged by Australia’s most highly respected brewers and educators, the Craft Beer Awards are an invaluable platform for Australia’s brewers to benchmark against the best in the business and to showcase the excellence of Australia’s craft beer industry.

Entries to the Craft Beer Awards are open to any craft brewers in Australia producing beer for commercial is eligible to participate. For the 2017 awards, the CBIA defines a craft brewery as one producing less than 40 million litres per annum.

Having been held in Queensland last year, this will be the first year the ACBC will be held in Adelaide, and it will run alognside the Adelaide Beer & Barbecue Festival, now in its third year.

The Craft Beer Awards are being held at the iconic Adelaide Oval on Thursday the 27 July 2017.