As new ad campaigns for summer pop up all over the country, web and in print, it seems Carlton Dry’s new Hello Beer campaign offering is not only more random than their last – who remembers the odd party shots and the dude in the gorilla suit? – but also doesn’t actually any sort of drinking. Instead it features images of young, slightly hipster men doing rather odd things.

Created by Clemenger BBDO Melbourne the series of images is meant to “explore some of the possibilities that come about when we open the portal to the unexpected and random” according to the press release.

Ant Keogh, executive creative director at Clemenger BBDO Melbourne says that the company simply asked photographers to capture the possible outcomes of a beer fueled afternoon with the lads.

“Clemenger BBDO Melbourne collaborated with photographers from around the country to capture the things that can happen when the boys get together for a beer,” he says.

The results, as can be seen, include: making a toast jacket, snorkeling in kitchen wipes and creating a beard made of pegs. 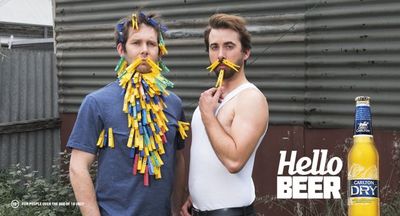 According to Andy Meldrum, General Manager for Marketing Carlton Dry the ads are a tad ridiculous, but their fans seem to like it.

“Ever decided to make a jacket out of toast? Perhaps you thought a beard made from laundry pegs would complete your look? No? Me neither. Luckily though, the photographers we worked with on this project did,” he says. “The ads are random, hopefully funny and frankly kind of ridiculous… but that’s what Carlton Dry has always been about.”

According to information released by the company, Carlton Dry is Australia’s fastest selling beer – based on absolute volume and value growth – and the number one selling beer in Western Australia, but it remains to be seen what impact is made by the new campaign. Comments on the ads on various websites have ranged from ‘brilliant’ to ‘generic’ to ‘could be any brand’.

Whatever the general consensus, the ads are an interesting look at a brand that markets itself to the younger generation of beer drinkers – compare the age and dress of the models in the print ad to those of the actors in the TV ads for XXXX that aired a few years back (the ones on the island with gems like the car engine chicken rotisserie) or the blue collar blokes in the VB ‘hard earned thirst’ ads. While spirit and RTD brands seem to excel at marketing to the 18-30 market, it seems that few beer brands have done the same, until recently.

It will be interesting to see how the general market reacts to the ridiculous nature of the ads.