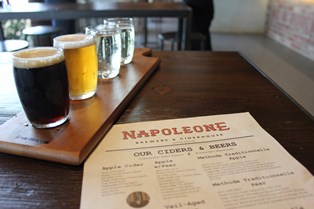 Inside the new Brewery & Ciderhouse

Built from the foundations of a 19th century dairy on the Napoleone family property, the stunning views to the surrounding hills, orchards and vines are matched inside by views through to the working brewery.

The brewery itself was originally owned by Moo Brew and could be seen up until recently at MONA in Tasmania, before its move to Victoria. The 18HL PSS system with 46hl unitanks allows for double brews. A microbrewery in the truest sense, Napoleone has a small four head counter pressure filler allowing them to package four hundred bottles per hour. Promoting the concept of a living beer, all of Napoleone’s brews will be unfiltered and unpasteurised.

First beers to appear are a classically hoppy American-style Pale Ale (5.1% ABV) and a roasted dark malt ‘Breakneck’ Porter (5.1% ABV), with brewer Ben Waymouth working on other predominately European-styles such as a Saison, ESB and a Helles to be released in the coming weeks.

Cidermaker Behn Payten creates a wide range of styles both traditional and experimental from the fresh, crisp Apple and Pear Ciders to the Cloudy Apple, Methode Traditionnelle, and sherry-style Veil-Aged Cider, with all ciders made onsite from estate grown fruit.

Tasting paddles, pots and pints are available every day as well as Meet the Brewer Saturdays and food pairings and meals from Meletos Café, a new dining space where chef Neil Cunningham puts together a locally inspired seasonal menu.

Napoleone is located less than an hour from Melbourne and will feature an evolving range of beers and ciders on tap.