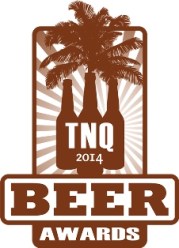 The second annual Tropical North Queensland (TNQ) Beer Awards are being held next week as part of the annual Palm Cove Reef Feast event from 1-12 October.

Held in Palm Cove, Reef Feast is a celebration of the region with 12 days of food events including the Beer Awards Dinner, the Beer Awards Judging, Seafood Saturday and Taste of Paradise. More than 7,000 locals and tourists are expected to attend.

The TNQ Beer Awards are open to commercial craft and home brew beers in seven categories ranging from Pale to Specialty Brews. Brewers are competing to become the Palm D’Or (Golden Palm) winners for the Craft Brewery of the Year and the Home Brewer of the Year.

Each winner will have their beer/brewery profiled on Reef Feast as well as promoted to local, state and national media.

For the first time, all entries in the Craft/Boutique section of the Awards will be matched to Palm Cove Restaurant selections by beer and food specialists. This menu will then be circulated to all Palm Cove Restaurants and Bars for their future menu development with beer alternatives.