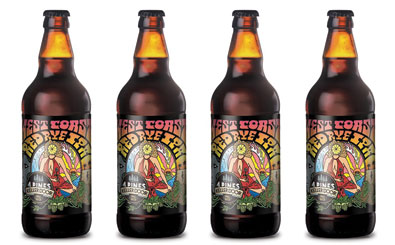 The Rye IPA is an American style, aromatic and full-flavoured beer, with Willcock adding that the rye style is a “pretty big and complex beer”.

Willcock also said that creating a rye beer does put a number of challenges in front of the brewer.

“Brewing with rye is a bit of a tricky challenge in itself; often when we’ve included rye as part of a recipe we’ve gone, 10 per cent, 20 per cent of the grain bill as rye, with barley also included.

“This time we dialled it right up, we didn’t want to shy away from the rye flavours. We thought if we’re going to brew a big, bold West Coast style then we’ve got to turn it up to the max, which is the way the Americans generally like to do it.

“So we went with 50 per cent rye. But rye, when you process it through the brewhouse, is quite a sticky grain, just the way its compounds are made up. It’s got some glycoproteins and it also doesn’t have a great husk, which is needed to supply structure to the filter bed. So it’s a slow and steady process through the brewhouse. We ran off the treacle-like worts in about 18 hours, rather than the usual six hours it takes us to make a barley beer.

“It’s just the way when you’re using rye, especially in large amounts, that slow and steady is the way to go. The brewers definitely exhibited their patience on that day.”

And having worked meticulously on the recipe and the brewing, Willcock is understandably proud of the West Coast Red Rye IPA and he explained what has given him the most pride.

“Rye is a unique grain,” he said, “and we’ve definitely got the rye flavour to come out in full force in the West Coast Red Rye and it complements really well the hops and the bitter finish from the IPA style. The hops and the rye come across as this really crisp finish, with a lot of spiciness and bitterness and on top of that you’ve got the beautiful aromatics of the hops; a lot of citrus, orange and piney notes from the American varieties we used, Citra and Amarillo.

“It’s not for the faint-hearted for sure. Immediately you’ll get punched in the nose by the aromatics, particularly the hops with the IPA coming to the fore. You’ll also get the subtle rye undertones and then in the flavour and mouth feel the rye particularly becomes evident and it has a spicy sweetness that blends with the hop finish to give a really punchy beer.”

The Keller Door release is available now for NSW bottleshops and is currently been rolled out nationally. The beer is 7.3 per cent ABV, with 65 IBU and carries an RRP of $9 per 500ml bottle.